Misconceptions about the Severity Spectrum of OCD

Every once in a while I will search on YouTube for videos raising awareness about OCD. In some videos the person making it will interview people without OCD, asking what they think OCD is. (Here are two prime examples: 1  and 2). I find these interviews fascinating.  Not only are there huge misunderstandings held by many people about what OCD is, but there also seem to be general trends within these misunderstandings.

Many people seem to think everyone is a little OCD and a few people they may have heard about in the news are just a few very extreme cases. In reality, most people do not actually have OCD. The D stands for a disorder, meaning it is debilitating and impacts your quality of life, and not everyone has it. These “extreme cases” they have heard of in reality are the people who truly do have OCD. I don’t want it to sound like OCD is some privilege bestowed upon only a few people. Not at all. But until we realize how serious  and severe even mild OCD is (not the mild most people think of, but truly mild on the spectrum of actually having OCD) OCD will be trivialized and misunderstood. At its norm my own OCD is classified as right between mild and moderate, yet is has a huge impact on my life, is present every day, and has stolen many hours and experiences from me. If I’m diagnosed as “a little OCD” there is no way those who casually claim to be “a little OCD” actually have OCD.

(These are intended to show general concepts and aren’t drawn to scale according to actual percentages…although that would be quite interesting to see. Perhaps that will be a future project.)

What many people think: 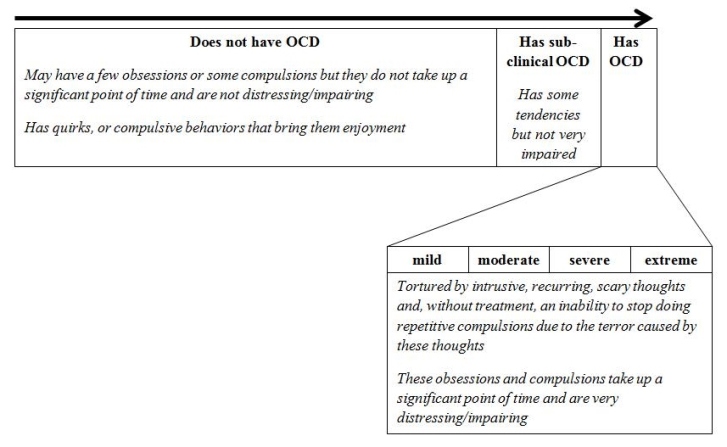 More information about the real severity spectrum of OCD: